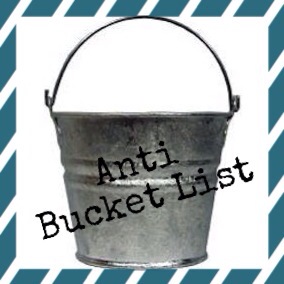 Okay, so I’m not going to lie… I had no freaking clue what an Anti Bucket List was. Then when I read the description of “things not to do before you die” I still didn’t get it. I was like, “Isn’t that just a list of things opposite of my dreams? That’s stupid.” LOL but I called on my good friend Mr. Google and decided to see if there was a better explanation since no one else had asked for clarification of this week’s topic (and I didn’t want to be the one who pulled a “I don’t get it…”). 🙂 In my search, I came across this Anti Bucket List post and suddenly it made sense! Yay! It’s not really opposites of my dreams, it’s more like, “You couldn’t pay me to…” which technically we already did last year so now I have to think of a new list. :p

I’m struggling though because I’m kind of a “never say never” kind of girl so I don’t want to jinx myself. I mean, I used to say I’d never go on a cruise but now I’ve been on two and love them… I’m totally singing Justin Bieber’s “Never Say Never” now, by the way.

Anyway let’s see what I can cook up…

I will never be a hunter. I know that most hunters do it for a good reason, but it’s just not something I can do. The only animal I’ve ever intentionally killed was a bat and it was awful and I’m pretty sure I’m suffering from Post Traumatic Stress Disorder because of it. I eat meat, but I don’t want to be the one who kills it. I sometimes even get weirded out when cooking meat.

I will never like bats. I don’t even like writing, typing or saying the word but I’ve already said it twice in this post. *does heebie jeebie dance* I am 100% absolutely terrified of them. I tried to face that fear last year and it only made things about 10,000 times worse so no… Never. (Note: please don’t tell me your experiences with the flying rodent bastards in the comments or tell me how much you love them. It doesn’t help. It actually makes things worse. It’s kind of like buying a pit bull for someone who is terrified of dogs. Just say no.)

I’ll never ride a motorcycle. I’ve known too many people who have died in motorcycle accidents. I’m not a fan. I did ride one once as a kid, but never again.

I’ll never like raw tomatoes. They’re slimy and nasty. I’ve retried them many times. No bueno.

I’ll never go on a haunted anything. I believe in spirits and ghosts and stuff but I don’t want to seek them out. I don’t like ghost stories, I don’t see movies about hauntings, and I’m never going to be like, “Let’s go stay in that haunted hotel, it’ll be awesome!”

I’ll never go scuba diving. I’m a Cancer and love the water but I also fear it. Most specifically water that is deeper than I am tall and wider than I can see. As cool as I think scuba diving could be, I know I could never do it because just the thought of the hugeness of the ocean freaks me out.

So there you have it… My anti bucket list.

Like Loading...
This entry was posted on Wednesday, January 14th, 2015 at 9:00 am and tagged with anti bucket list, wednesday words and posted in Wednesday Words. You can follow any responses to this entry through the RSS 2.0 feed.
« Wednesday Words: Favorite Superheroes
Wordless Wednesday: on my walls »