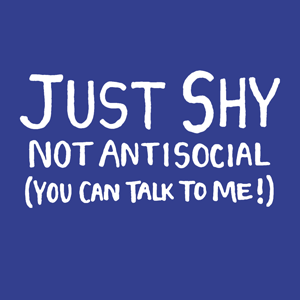 Believe it or not, I’m a painfully shy person.

One of the greatest regrets of my life so far is knowing that my paternal grandfather died without ever having a true conversation with me. I was in the second or third grade when he died, I was plenty old enough to hold a conversation with him but I never did because I was so shy that I wouldn’t talk to him. I will never forget that feeling of shame I had when my father told me how sad he was that my Grandpa had died without really knowing me. In fact, that shame lives with me nearly thirty years later and probably always will. I can’t go to Detroit to visit family without someone mentioning how “Kellie was probably a teenager before I knew she could actually talk.” Honestly, it breaks my heart to think about the relationships I missed out on with my family because of my shyness. It’s not that anyone ever hurt me or had been mean to me… I had no logical reason for being mute, I was just shy.

For many people though being shy isn’t a good enough excuse. People don’t understand it and think a shy person can just force themselves to open up. Trust me when I say, it’s not always that easy. Thinking about my Grandpa as I sat in a coffee shop writing the first draft of this post made me cry. I’m not someone who likes to cry and certainly not in public, but I sat there crying my heart out as I wrote in my notebook because I was blanketed with sadness as I thought of how horrified I would be if my children one day couldn’t know my own dad. Or how incredibly devastating it would be for him if my brother’s children, all who simply adore their Papa, wouldn’t speak to him today.
END_OF_DOCUMENT_TOKEN_TO_BE_REPLACED