Blog Pimp (Family Edition): Bury Me With My Needles

Sarah who runs the Bury Me With My Needles blog is actually a distant cousin of mine.  We met years ago at a family reunion but that’s it. Thanks to my mom’s cousin’s wife Joyce though I was able to come across Sarah’s blog and holy cow does she do some fun things with yarn! 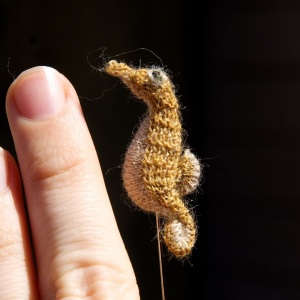 Who would have guessed that two girls who met years ago would both end up to be lovers of knitting?  I’m looking forward to learning more about her while also seeing what else she comes up with!

The Problem with Fanfic

There’s a lot of talk going on about fanfic lately. In fact, I think more people suddenly know what fanfic is than ever before. Sadly though, it’s because a series of Twilight fanfic stories have been published and despite how awful the writing is (and the fact that it’s fanfic) it’s selling like crazy. Yes, I’m talking about 50 Shades of Grey by E.L. James.

I will start this rant by saying that no, I haven’t read the books in their entirety. Frankly, I don’t plan to read them because the bits of the books I have seen make me want to vomit. I’m all for people getting published… I really am. Just like any writer I want to have bestselling books that inspire movies. I want people talking about my books all over the world on talk shows. But I have a serious problem with the 50 Shades book and its subsequent spawn, and it’s not because I’m jealous.

Let me also say that I write fanfic. I’ve been writing fanfic for over a decade now and without it I wouldn’t have fallen in love with writing like I have. Without fanfic I wouldn’t have groupies readers all over the planet who have read my books. I love fanfic and I love being a fanfic author. My distaste of the success of James is not because I’m a stodgy jerk who doesn’t understand the world of fanfic.

There are different types of fanfic though and I feel like with all of this new media coverage of fanfic people don’t understand the difference. One kind fanfic could possibly be turned into a standalone book without seeming like a total fucking rip off, and another kind walks the line of plagiarism, stealing, shadiness and just wrongness.

The fanfic that I write consists of using a person who exists in real life as a character in a fictional story. For example taking oh… let’s say a Backstreet Boy and throwing him into all sorts of drama (and hopefully lots of hot sex) in the form of a novel or short story. This is the kind of fanfic that in my humble opinion could be turned into publishable work. Names can be changed and although you might be able to draw similarities, it’s still fiction. In other words, it’s original. The characters are mine and as I see it, these stars are just the actors in my book. I have a book (which ironically is named Shades of Gray) that if I were to go through and take out the references to actual people and perhaps do a little tweaking of certain details, it would stand alone as a book about a chick who falls in love with a guy in a band. END_OF_DOCUMENT_TOKEN_TO_BE_REPLACED