It’s time for another flash fiction photo piece which means a new chapter of my Jensen story.  I really need to think of a title for this bad boy, but I’m not one of those people who gets a title right away. The next several chapters of this one don’t have photos attached to them so I’ll be posting them in between now and next month’s photo prompt. 🙂  I’m throwing in Chapter 6 today as a bonus, just follow the link at the end of this one! 🙂  I’ve got to do a little tinkering but my hope is to post a new chapter each week this month so that I can be read for the next photo in October. 🙂 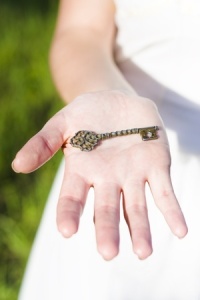 I’m not sure how long we sat by the fire and talked that night, but when the fire had pretty much died it was definitely too late for me to be walking home by myself so Josh offered to walk me home.  Krypto woke up and came along as well; ridiculously happy to be out on a leash.  Ever the gentleman, Josh held his hand out to me, “May I?”

I smiled and took his hand, “You may…”

We walked along quietly, sometimes laughing at Krypto’s never ending excitement as he inspected everything that he could get his cute little nose on.  I thought about the things I’d learned about Josh that night and my head went a little crazy with all of the new information.  He’d been such a mystery to me for so long that anything and everything new that I learned was so damn exciting.  I wondered if I could get one of my aunts to meet him soon and shake his hand to see if they had any visions about him.  I also wondered what that night’s visions would bring, if anything.

“So…” he said and squeezed my hand in his.  “Do you work tomorrow?”

I nodded, “Yep.  My next day off isn’t until this weekend.  I think I actually have the whole weekend off, but I’d have to check my planner.  How about you?”

“I’ve got two more twelves then I have a week off.  I usually work seven on and seven off.”

“Good lord, you must be exhausted.  Why did you stay up so late?”

He chuckled and shrugged, “Good company.  I’ll feel it tomorrow but it’ll be okay.  It was worth it.”

“Come in before your shift, I’ll make you something with a ridiculous amount of shots in it.”

I spotted something shiny just off of the path and stopped to look at it.  There in the grass was a beautiful old fashioned key.  It looked so much like the key in the blue door of my visions that I knew the universe had put it there for me.  The big difference was that the end of the key was shaped like a filigree heart.  I picked the key up with a smile and showed it to Josh.  “Do you know what this means?”

He raised an eyebrow at me, “That someone dropped a key?”

I rolled my eyes at him but laughed, “No.  When you find a key it represents the opening up, or unlocking, of new things.  It means that good things are on the way.”

“So what does it mean when I lose my car keys?”

“Most likely it means that you’re a slob and forgetful…” I said and giggled.

He laughed too, “Both true statements…”  He reached out and took the key from me to look at it as we resumed walking. “Actually, this is a really cool key.”

I nodded, “You have to pay attention to the little signs that the universe sends you.  There are clues all over the place, but most people ignore them.”

“Are they ever wrong?”

“No.  You can interpret them wrong, but the signs themselves are never wrong.”

“So what other signs are there that I’m missing?”

I thought of the burned paper heart that I’d found the day we met.  “Hearts.  Anything heart shaped is about love.  But the condition of the heart is what you have to pay attention to.  A broken heart pretty much always means heartache, but you can have a perfectly shaped heart mean heartache too if it’s made out of something weak that can easily fall apart.  A heart shaped rock means a strong, solid love, but one made out of a thin dying leaf is more fragile.  It’s like saying that there’s definitely going to be love in your life but it’s delicate so you have to be careful.”

“Okay, that makes sense, but what about when it’s February and hearts are everywhere?”

“For one thing, it means that love is on the minds of more people than usual.  But you also have to be careful because not every heart-shaped thing is a sign.  I mean, if you buy a bag of heart-shaped red hots, they aren’t all signs that you’re going to fall in love.  But if you spill your coffee and before you clean it up you realize that it’s in the shape of a heart, that’s a sign that’s made for you, not just a random reminder of love in the world.”

He smiled at me, “I’m going to be looking for hearts everywhere now.”

I chuckled, “It happens… But don’t try too hard.  Just let them come to you.”

“Wait a minute…” he said and stopped walking.  “That key has a heart on it.”  I grinned as I watched him making the connection.  “So that means that love is unlocking for you?”

“And all of those little holes in the heart… is that bad?”

I shrugged, “Maybe?  It’s not always something you can figure out right away.”

“But it’s a pretty strong key too, so that’s a good sign right?”

“Yep…” I said, still smiling and pulled on his hand to get him walking again.

“My last name has the word hart in it.  It’s spelled wrong, but what does that mean?”

“That you’re a lover not a fighter?” I teased with a giggle.

We walked along in silence for a moment before he looked at me again, “You’re kind of amazing.”

“It comes naturally…” I said and giggled.  We approached my house and I smiled, “This is me.  I’m on the top floor.”  I lived in an old house that had been turned into a duplex.  My place was a sweet little one bedroom apartment over a single mom who had adorable twin boys.

“I’d ask you to come up but I know how utterly messy it is up there right now.  Plus you need to go to bed.”

“Yep…” I said with a smile and then scooped Krypto up into my arms.  He licked my nose which made me laugh, “Crazy boy.”  I placed a kiss on the top of his head and then said goodnight to him and told him to behave for his dad.  Josh watched me the whole time with a big grin on his face.  I handed the puppy to him and smiled, “You behave too…”

He chuckled and held up three fingers, “Scout’s honor.”

He leaned in a pressed a soft kiss to my lips that made me feel like I was floating.  “Goodnight, Jensen.”

“Text me when you get home?  Otherwise I’ll worry.”

He nodded, “Will do.”  He kissed me one more time then smiled, “Til tomorrow…”

I watched him as he walked away and just like the day I’d met him, he turned around after a few steps to take another look at me and waved before resuming his walk.  I felt like I was suddenly alive after just going through the motions for so many years.  Like I’d been standing in the bushes looking through a window on life but had never actually been invited inside.  I’d never understood how people’s lives changed so much when they fell in love with someone, but in one evening with Josh, I finally figured it out.  I desperately needed to know more about him.

Like Loading...
This entry was posted on Monday, September 7th, 2015 at 9:00 am and posted in flash fiction, Jensen. You can follow any responses to this entry through the RSS 2.0 feed.
« Flash Fiction – “Meeting Place”
A to Z Recipies? »