This week’s topic is “Behind the scenes of my latest project.”  I assume that this post is supposed to be about my current writing work in progress since we’re all writers, but since I haven’t written anything but case notes, reports, and a few blog posts lately, I can’t really share that with you.  I’m still working on the same writing projects that I’ve been working on for ages. I did begin plotting a sequel to my fanfic Double Exposure when I was on my cruise last October with my number one DE groupie.  I really, really, want to start it but I haven’t figured out exactly how I want to write it, and then there’s that whole issue of finding the time to write. So yeah… no writing has happened.

I decided a few weeks ago when I was deep in a depression funk that I simply need to have more time for creativity in my life.   Even if I’m only getting in thirty minutes a day of something creative, it’s better than the big fat nothing that I’d been getting.  I got caught up on my paperwork for my job which was a huge relief, and I’ve been trying really hard to get in those 30 minutes, or more, of creative goodness each day.

Sadly, writing hasn’t yet been a part of those daily treats.  Mostly because a measly half hour of writing time isn’t enough for me.  But trust me, my muse has been itching for some attention since I started working creativity back into my daily life.  🙂  What I have been doing though is knitting, doodling, and reading (I consider reading a creative art because it often encourages my own writing… so there!).

On the knitting home front I’m working on a few different things.  There’s the ongoing Hue Shift Afghan project that I started last summer with a few of my local knitter friends.  The Hue Shift is a blanket of rainbow goodness and I’m absolutely in love with it.  When finished it will have 100 blocks plus one gigantic border and should look something like this (picture stolen from the internet from someone who has actually finished her afghan, lol): 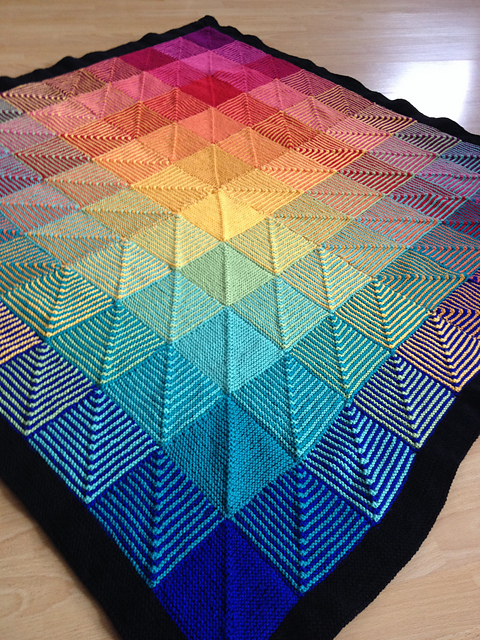 My Hue Shift is almost half way done.  Here’s one section of 25 squares: 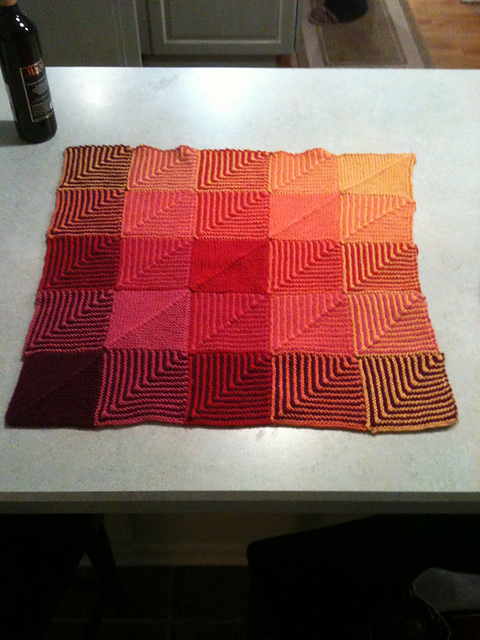 And a peek at the second section of 25: 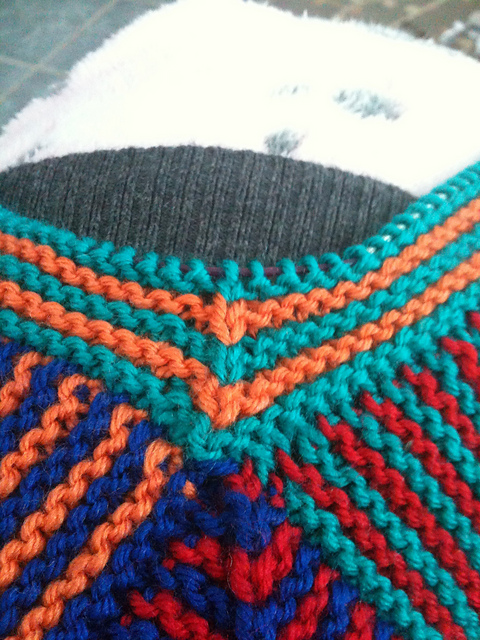 I simply can’t wait for it to finally be done!  I don’t work on it nearly as often as I should though.  I try to get together with my other Shifter’s each week but thanks to my job of doom plus my recent depression and anxiety funk that doesn’t always happen.   But it’s slowly but surely coming along.

Another knitting WIP are these socks: 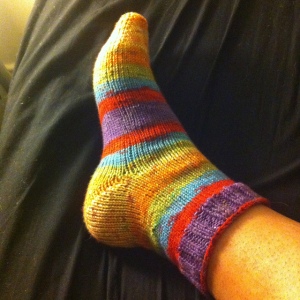 Can you tell I have a thing for rainbows? 🙂  I got this yarn (Serenity Garden by Premier Yarns in “Gems”) at the grocery store of all places, and it’s lovely.  Soft, great colors, washable, and cheap!  I’m currently working on sock two. 🙂  I used Judy’s Magic Toe Up Cast On for the toe, the Fish Kiss Lips Heel, and the rest of the sock is just a plain vanilla sock.  Word to the wise… if you’re going to use the FKL Heel… just start by watching the YouTube videos referenced in the pattern and save yourself the frustration of trying to understand it from the written instructions.  LOL  Thank goodness for putting in a lifeline!

Finally, I’m working on a project called Crackerjack that fellow blogger EarthChickKnits thought up.  The Crackerjack is basically a project that you work on during the MLB baseball season.  She’s doing a cowl, but because I kind of loathe cowls I’m making a scarf instead.  Each of the 162 games of the season will be represented in my scarf.  Because I’m a Michigan girl and a Tiger fan, these are my colors: 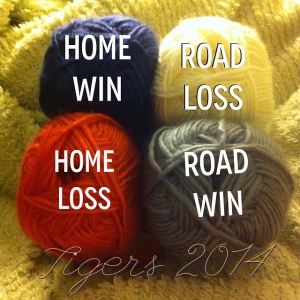 And this is what my scarf looks like so far:

I’m a few games behind, but I prefer to do it that way so I’m not just knitting for one game at a time.  The ends will be woven in eventually too. 🙂  But isn’t it fun?  We’ve got a win/loss stripe thing going on which for the sake of knitting is cool, but for the sake of the team record I’m hoping to see a lot more big chucks of Navy and Grey. 🙂  I’m using Sheep(ish) yarn by Vickie Howell.  If you’re a knitter, it’s not too late to start your own Crackerjack!  There is a Ravelry group and everything. 🙂  I’m “MittenKel” over there, by the way, so friend me!

I’ve also been doodling more, which makes me happy because I really love it and don’t do it enough.  I love a good Zentangle and have several friends on Instagram that share their work and make me want to bust out my pens.  My latest tangle started out like this: 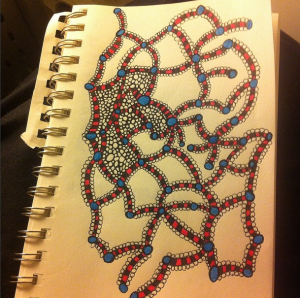 I haven’t decided yet if I’m going to continue with filling in the bubbles around the outside or just call it good.  But it’s a fun stress buster when I’m too tired to knit or don’t have a lot of time.  I also just bought a new Zentangle book that has a bunch of fun activities in it, so that should be fun.

So what sorts of things are you working on?  Share them in the comments section below and don’t forget to check out my fellow Wednesday Words girls to see what their WIP’s are. Oh and welcome Gwendolyn Cease to the Wednesday group!  She’s another fellow writer and is new to the group this week!

Like Loading...
This entry was posted on Wednesday, April 23rd, 2014 at 9:00 am and posted in Knitting, Wednesday Words. You can follow any responses to this entry through the RSS 2.0 feed.
« Wednesday Words: Celebrity Crushes
WW: You couldn’t pay me to… »