This week for Wednesday Words I’ve been asked to list five things that I can’t live without so here they are in no particular order.

Like the title of this blog says, I’m part of the Prozac Nation. Dysthymia seriously sucks, but medication makes it somewhat tolerable. I still have my bad days and I still have to fight the struggle of clinical depression each and every day, but with my meds it’s a little bit easier to do. Before my meds I was kind of a mess. Now I’m just a slight mess. 🙂

No, I’m not trying to cheat by lumping family and friends together. 🙂 I am truly one of those people whose family are their friends and friends are their family. I’ve been burned by a lot of people. I sometimes trust too easily because I get caught up in the idea of a fun new person in my life. When I make a new friend I generally assume that they’re going to be around forever. Then when things turn ugly or the friend just drops out of my life I’m left all devastated because it didn’t last forever. So if I let you into my heart, it’s a pretty special thing. My friends are family and uber important to me. If I consider you to be a true friend, I’ll drop everything to be there for you if you need me just like I’d do with my family. I’m a Cancer, which means I’m often led by my heart. Sometimes it gets me in trouble, but for the most part I think it adds to my character. 🙂

As a painfully shy person, the internet is kind of a godsend. I was thinking the other day about how email, blogging, Facebook, Twitter etc. has made such a huge difference in my life. I’ve written before about how being a Backstreet Boys fan and connecting with other fans online literally saved my life and helped me get diagnosed with Dysthymia and on the road to learning how to live with it. On top of that though, the internet gives me the opportunity to be myself without worrying about what other people think. For example, when I was in high school people didn’t have the internet. I had pen pals who I sent snail mail to, and that was awesome, but for the most part I had to rely on my local friends for everything. I was a huge New Kids on the Block fan, but by the time high school rolled around being a NKOTB fan wasn’t exactly cool anymore. But I was still way into them and very much obsessed with them. I didn’t feel like I could share that with my friends though because they’d all moved on to other crushes while I was still mooning over Jon. 😉 Now a days though, if your local friends aren’t fans of someone that you like, you can still connect with other fans on the internet and share your love with them. Sure, I still get all sorts of crap for loving boybands, but I tolerate that crap a little easier because I know I’m not alone. I know that there are tons of other people out there who love the things I love and won’t put me down for it. That’s pretty freaking powerful. Plus, I met all of the girls that I’m blogging with on Wednesdays all because of Twitter and because I was a BSB fanfic writer once upon a time. So yay, social media!

I write, read, knit, stitch, make jewelry, draw, paint, scrapbook and pretty much do anything creative that I can get my hands on. Creativity makes me happy and fills up my heart. When I’m writing regularly, even if it’s “just” for my online groupies, I’m happiest. I love when people read my fiction and get caught up in it just as much as I do. I love getting feedback and hearing how something that came out of my head touched someone’s life. People are always telling me, “You’re so creative!” I know that I am, but it’s really not something that I try to do. I just like being creative. I like coloring outside the box and doing things my own way. I don’t wear colorful band-aids because I want people to pay attention to me and ask me what happened. I wear them because they’re fun! They’re prettier! I like to knit because I enjoy playing with pretty yarn and making things. I just like to create. 🙂 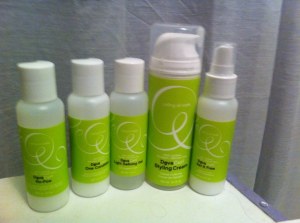 Okay, I know… it’s pretty shallow to put hair product on here. But I’ve been sitting on my couch trying to think up a fifth thing and I just haven’t been able to decide. 🙂 Here’s the thing though… I have thick naturally curly hair. My hair has a mind of its own and without product it’s a big scary mess. I’m a big fan of Curls Rock’s Amplifier. It’s pretty much amazing. But most recently I’ve discovered a line called Deva Curl and although I’m still figuring out what the right hair cocktail is for me, I’m really loving what it’s done to my hair.

Like Loading...
This entry was posted on Wednesday, March 12th, 2014 at 9:00 am and tagged with must have, wednesday words, writing and posted in Wednesday Words. You can follow any responses to this entry through the RSS 2.0 feed.
« Wednesday Words!
Wednesday Words – Peeved »